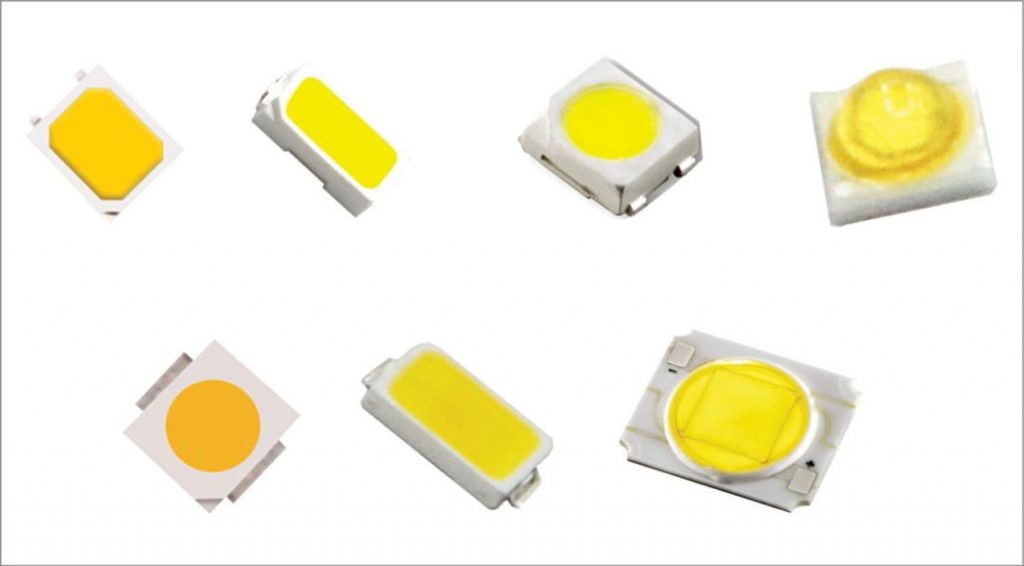 Light Emitting Diode (LED) lights have risen rapidly in recent years as the primary light source in every housing. They are recognized as green light sources and environmentally friendly. People choose LED lights with their outstanding advantages. They include long-lasting, small size, energy saving, and radiation-free.

Many LED light companies in China are distributing wholesale lights. Before making a purchase, people would search and compare the LED lights in terms of pricing and functionality. To compete against other competitors, the packaging of LEDs is crucial. Good packaging technology could lead to better durability and efficiency.

Let’s look at what types of LED packages are available in China.

What is an LED Package?

LED packaging is a technology involving multiple disciplines (such as optics, thermals, mechanics, electricity, mechanics, materials, semiconductors, etc.). The performance and life of the LED are affected by the packaging technology.

An LED package refers to the package of light-emitting chips, generally consisting of an LED chip and phosphor. Packaging is a critical link in the preparation of white LEDs.

A single LED chip cannot emit white light with a continuous spectrum. It is due to the emitting mechanism of semiconductor materials. Therefore, the LED package comes in the right way. The LED chip emits blue light, and the phosphor material converts some lights into green and red wavelengths in the right proportion. As a result, white LED light is produced during the packaging process.

The purposes of the LED package are as follows:

The function of the LED package is to connect the outer leads to the electrodes of the LED chip. It protects the chip by preventing exposure to the air or damage mechanically. Also, it improves luminous efficiency, thereby improving LED lifespan.

After years of development, LED design and packaging technology have undergone numerous changes. Check it out below on the four main LED packaging types.

F5 is the first package structure successfully developed and put on the market. There are many varieties, most commonly seen in indicator bulbs. You may often see these kinds of LED lights wholesale because of their vast usability in the market.

The LED chip is bonded to the lead frame while the electrodes connect with a gold wire. The top is encapsulated with epoxy resin to act as a lens and to control the beam divergence angle. It also helps improve the luminous efficiency of the chip.

COB is a LED chip directly pasted on the printed circuit board (PCB) by adhesive or solder. It is the most advanced technology seen in society today.

COB technology can effectively reduce the thermal resistance of the package. Besides, it can also increase the power density of the LED package. At present, the packaging of high-power LEDs mainly adopts COB technology. Some examples included: high-bay lighting, street lighting, and stadium lighting.

SMD-LED is mounted and soldered onto the circuit board. It is small in size, has a large scattering angle, and has high reliability. Three or four diodes are packaged on a single SMD chip, creating a range of luminous colors, including white light.

Thus, it is very suitable for electronic products that require indicators. For instance, keyboard display lighting of mobile phones and backlight lighting of TV sets.

Light manufacturers are developing toward high power in the design of LED chips and packaging. The purpose is to obtain high-brightness LED light sources.

Despite the four typical types, there are also other common packaging types that Chinese LED light manufacturers use:

Lamp-LED was introduced in the earlier stages, and its package was in the form of potting. The potting process first injects liquid epoxy resin into the LED molding cavity, then leaves it to dry. Due to the relatively simple manufacturing process and low cost, it has a high market among wholesale light.

At present, another focus of LED packaging is side-emitting packaging. Assume that you want to use LED as the backlight source of a liquid crystal display (LCD). The side light emission of the LED must be the same as the front light emission to achieve evenness. Side-LED emits side light using the principle of the reflector. It applies high-power LEDs to large-size LCD backlight modules.

The flip-chip LED package is a relatively new technology by light manufacturers. It has the advantages of small size, high performance, and reduction of energy consumption. Hence, it has become a significant development trend for high-power LED packaging.

The advantages of the manufacturing process are apparent. After the chip is flipped, the electrodes are directly in contact with the heat dissipation substrate. Thus, there is no sapphire need for heat dissipation. LED lights suppliers or users can use it with a high current.

What is the Digit Codes for LED Package Types?

Different sizes will have different powers and applications. Also, the standard might differ slightly among all LED light suppliers. You can further study the difference between SMD 5050 and 2835 in this post.

3528 and 5050 sizes are the first generations of LEDs in the older style strips. They are both SMD-LED packages. In terms of appearance, generally, 5050 light strips are square, while 3528 light strips are rectangular.

5050 LEDs have better performance and higher brightness than 3528 LEDs. But, more complex production of 5050 LEDs will inevitably cost higher. They are generally used for product showcases, home ceilings, and ultra-thin light box backlights. Many also use them for hotel KTV decoration, outdoor lighting, and ceiling porch decoration.

The size of 5730 LEDs is larger than the 2835 LEDs, which means it performs better in heat dissipation. At the same time, the shortcomings are also obvious, which include large space consumption and higher cost. Frankly speaking, 2835 LED is more cost-effective than 5730.

Besides the types mentioned above, here are some other packages types you might come across with:

Types of Quality for LED Packaging

The quality of LED packaging is affected by the type of wire bond. It is what Chinese LED light manufacturers would consider during the production of lights.

The performance of gold wires is stable. However, its cost is high too. Gold is generally used for anti-oxidation to ensure stable contact. Therefore, it is better to use gold wire LED packaging in a harsh outdoor environment to elongate the lifespan of LEDs.

Therefore, a cheap alternative: alloy wire, has emerged from time to time. The composition of the alloy wire is mainly a large amount of silver doped based on gold wire, palladium, and other components. However, there is a certain degree of oxidation.

The price of copper wire is low, which is what LED light companies would consider for cost reduction. It is more suitable for small wire bonding. Also, the copper wire is easily oxidized, and the bonding process is unstable.

How to Choose a LED Light Supplier from China?

Considering LED lights wholesale, there are many Chinese LED light manufacturers in China. There are some factors you might be looking at in choosing a reliable LED light distributor in China:

Darkless LED is an expert LED lighting solutions manufacturer with over 20 years of experience. Our marketing office and production facilities allow us to serve various industries worldwide. They include the architectural, interior, landscape, and decoration lighting industries.

Our experienced teams aim to provide the best quality for your need. We’ve also completed 30+ large-scale projects and gained numerous satisfied customers. You will get excellent products and after-sales service from us.

In short, various types of LED packaging are distributed by LED light suppliers. Each of the package types has its uniqueness, pros, and cons. Choosing according to your needs in terms of pricing, performance, and durability is vital.

I hope you find all you need about LED packaging in this article. If you plan to import from experienced Chinese LED light manufacturers, feel free to contact us for your lighting solution.