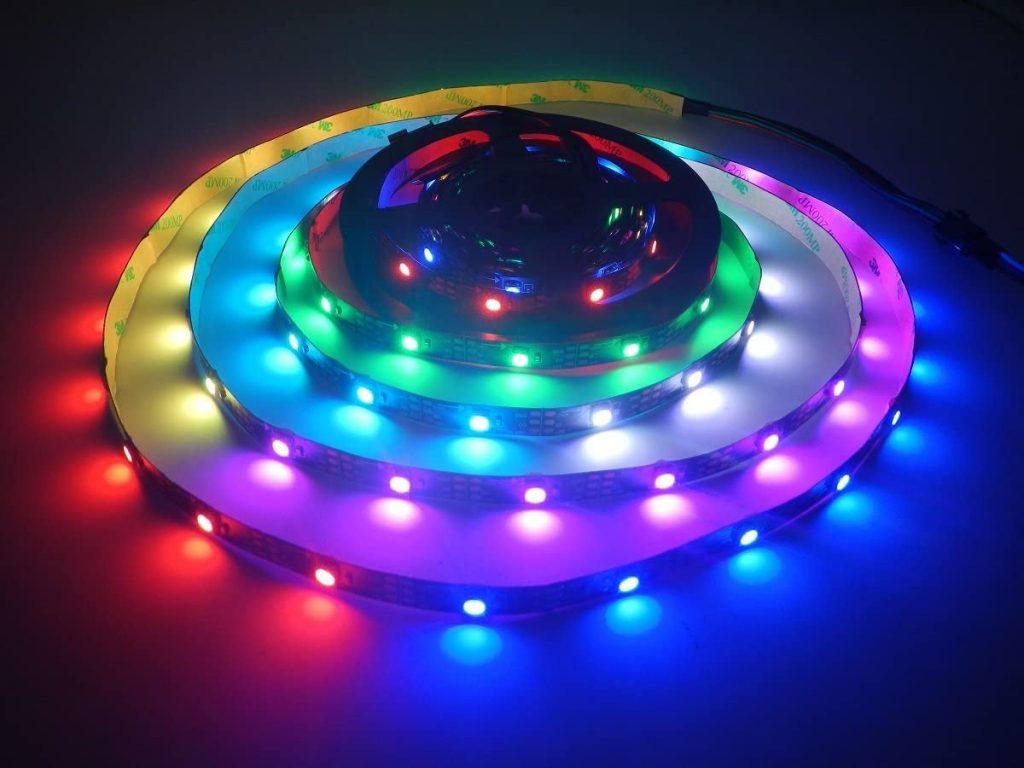 The LED strip light is a modern-day lighting product that brightens up your space. It is available in several colors and doesn’t rack up your electricity bills. But how do they actually work? Let us check out the same in this blog!

What is an LED Strip?

LED strips consist of individual emitters that are mounted on flexible and narrow circuit boards. They operate on DC power and take up low voltage. They come in the form of long reels of 16 feet or 5 meters. Moreover, the mounting technique is also easy due to the presence of double-sided adhesive tape.

Most LED strips are ½ inch in width and go up to 16 feet in length. If you wish to, it can also be chopped into the desired length. However, ensure that you cut it in the marked cutlines only. These cutlines are located at every 1 to 2 inches distance.

To stick your LED strip to the wall, simply peel the liner off from the adhesive. Now, gently place it over the desired location and press it down for a few seconds. You can mount your LED strip on any surface as long as it isn’t too wet. This is applicable even for uneven and curved surfaces.

How is the brightness of an LED strip determined?

The brightness of an LED strip is calculated in the metric system termed Lumens. As opposed to incandescent bulbs, LED strips have different efficiency levels. Therefore, the wattage rating isn’t always helpful in determining the final light output.

Your LED strip’s wattage is calculated in lumens/foot or lumens/meter. A branded LED strip provides brightness close to 450 lumens/foot.

The brightness of an LED strip is determined primarily by 3 factors:

Any LED strip sold without any brightness specifications noted in lumens can be a big no. Also, check for any low-cost strips claiming high brightness. They might overdrive your LEDs to the point that causes premature failure or overheating. To know whether your LED strip can overheat, check out our blog that explains it in detail.

When looking for LED strips in the market, you might find several variants that include:

However, you don’t have to bother much about these. The factor that is noteworthy is the number of individual LEDs on each foot. Apart from this, the power drawn by each foot is also important. The density of the LED chip helps determine the overall distance between each LED. Some strips might have dark spots, which make up for the poor quality lighting experience.

LED strips with a high-density setup provide the best lighting effect. The number here comes to 36 LEDs on each foot of the strip. Make sure you take into account the LED strip’s density when comparing the prices.

Next, make sure you consider the power being drawn by the LED/foot. This determines the overall power your strip light will consume.

Now that you are aware of the basics let us understand how an LED strip works.

Understanding the Workings of an LED Strip

Unknown to most users, there are two variants of LED strips that include:

Analog LED strips are designed to include white, red, yellow, green, blue, and other colors（collectively monochromatic）, including the RGB light. Users can control the current passing through the light strip with the help of a controller. It can also be used to increase or decrease the strip’s brightness. Users can control the signal transmission, such as changing mode or time to bring in color changes in the LED Strip.

However, analog LED strips can only be used to bring in simple changes in lighting effects, such as change the color and brightness at the same time, cannot change color separately. It cannot be edited twice. For complex change in effect, one can make specific changes to a single area or a single lamp bead to set the desired lighting needs. With the digital LED strip, the changes are more complex and well-defined. So, if you are looking for a customized lighting effect, a digital LED strip should be your choice.

A full 12-volt power passing through the strip would radiate white color. On the other hand, power change would help create colored lighting effects.

So, what about digital LED strips? How do they work?

Although digital LED strips have become popular recently, they are fairly versatile. This is due to the fact that each LED in the strip can be controlled individually. So, you can change each LED to the desired color. For example, if the first LED is green, the next can be yellow, and so on. Keep in mind that these LED strips run on 5-volt power and aren’t compatible with headers or analog strips. Digitally modifiable LED strips allow the users to create amazing effects with quick color changes. This isn’t possible with analog LED strips.

The IC distribution is generally divided into 2 types. One is a group with IC (usually an IC and 3 or 6 LEDs as a group). Also, this group has an IC. This group is collectively referred to as a pixel). The other is only a single built-in IC LED then this individual LED is a pixel.

Each pixel point can be different from the other pixel points in color, and can be controlled individually in the background. This allows the user to create amazingly varied effects and specific images by changing the color appropriately.

Since there are 20 to 30 types of ICs for each of the above 2 control modes, please choose different controllers according to the ICs used in the strip when choosing the LED Strip. If you don’t know how to choose, you can get in touch with professional LED suppliers and manufacturers like Darkless LED. And while you are looking for LED strip lights, do not forget to check out the advantages of an LED strip.

To understand the working of an LED strip better, let us take an example:

Say you have an SMD 5050 RGB W 4-in-1 LED Strip. The 4-in-1 here means that it has 4 LEDs placed within one 5050 enclosure. This includes the standard red, green, and blue LED along with a white LED. The white helps facilitate better color mixing as opposed to LEDs that simply have RGB.

What makes these strips more efficient is that the heat from the LED disperses into the strip’s PCB copper. The wider the surface area of the copper used, the higher its efficiency. Moreover, a thicker copper surface will ensure lower chances of voltage drop. This ensures that the strip works in a glitch-free manner.

The anodes in the strip are connected to the common +12V. Then each anode is connected on the other side in a series. This means all the red LEDs are connected to each other, and the same is applicable for other colors as well. Each color needs to run through a limited resistor that helps with the current flow. Finally, they run to the RGB W output giving you the desired result.

If you are wondering how each LED is connected to another segment, it is connected in a parallel manner. So, if you cut the strip from the middle, the setup would still be the same.

To start controlling your LED light strips with Arduino, install the dedicated software on your laptop or computer. This software is termed Arduino IDE.

Arduino controls your LED strip by communicating with the sensors and modules via electric current. The functionality is similar to 1’s and 0’s in the binary code. The 1 represents that the power is on, which is termed the “High Signal”. Alternatively, the “Low Signal” is when the power is off, and it is represented by 0. The duration of the current flow can vary from a microsecond to several minutes.

If you need to control your LED strip with Arduino, it is important that it has a resistor to control the unchecked current flow. In the absence of a resistor, the LED can burn out.

The following components are required to connect your LED Strip with Arduino:

Start by connecting the Arduino board with the computer with the help of a USB. Now, open the IDE software installed on your computer. Now, you can set a variable as required to control the brightness and colors. Controlling LED strips via Arduino requires a bit of coding. If you aren’t aware of the coding basics, you can find pre-defined codes online.

With this information, you can now enjoy the beauty of LED strips. Make sure you read through the instructions manual to ensure proper installation. Remember, a faulty installation can cause your LED strip to break. You can learn more about the issues of faulty installation and install your strip the right way.